Have you ever wanted to experience something different from the usual Christmas parades? Jilleen at SoCal Field Trips probably has Christmas Boat Parades in Southern California happening up and down the California coast.

There is something to be said about Christmas lights gleaming off the surface of the ocean water on a winter evening. All the way from Santa Barbara to San Diego, there are over 14 spectacular events.  Large ones like the L.A. Harbor Holiday Afloat Parade displaying more than 100 boats or some smaller events such as the Naples Island Annual Boat Parade.

Why don’t you plan to spend a relaxing holiday evening with your family and friends at the waterfront enjoying the sights and sounds of Christmas! Here are some that I think would be fun to attend:

Boat parade by water’s edge at 7:30 pm.  100 boaters compete in the categories of style, intricacy, and outlandishness.  Past years’ entries have featured towering light displays and inflatable snowmen riding motorcycles and planes. In 2008, one boater even outfitted his craft with rotating wooden attachments that gave the appearance of dolphins swimming alongside. Seating is somewhat limited, so you may have to stand during the duration of the parade.  Yet the standing areas offer the best views of the parade. 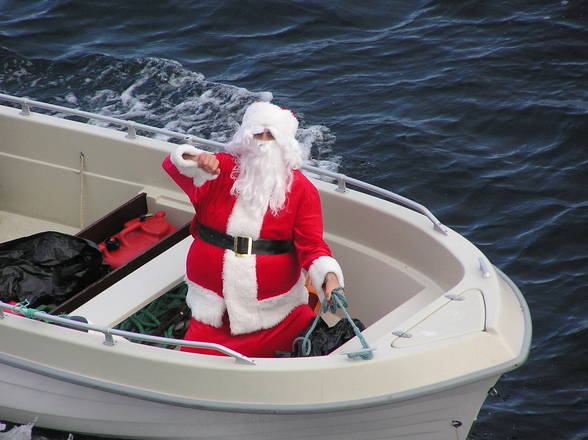 The large boat parade starts at 6 p.m. with the small boat parade following at 6:45 pm.  The parade will begin off Naples Plaza Park, with the large boats cruising along the outside of the islands and small boats navigating the canals.

Free parking is available at Alamitos Bay Marina off 2 Street and Marina Drive, just over the Davies Bridge from Naples.  Mothers Beach off Ravenna and Appian Way has metered parking, while Bayshore and Ocean Boulevard offers paid beach parking.

The two boat parades that I listed above are just the tip of the iceberg. If you would like to see the rest of the Christmas Boat Parades in Southern California happening this year, take a look at SoCal Field Trips to plan your holiday trip down to the water.